With the goal to enhance ethnic people’s awareness and capacity in using their rights and responsibilities in community forest management and sponsored by the Rosa Luxemburg Stiftung (RLS), C&E Center has coordinated with the Forest Protection Department of Quang Nam province and Forestry Science & Technology Association in Thua Thien Hue province has implemented the project “Sustainable management of natural forest through improving awareness and building capacity to improve the rights and legal status of ethnic minority communities to natural forest in central Vietnam (2012-2014)”

In the 2nd year, the project has gained many good outcomes and the workshop “Status and solutions to support the forest and land allocation process in Quang Nam and Thua Thien Hue”, organized in Tam Ky city, aimed at exchanging and sharing information relevant to the situation of the FLA process in 02 project provinces, outcomes and lessons learned in enhancing awareness and building capacity for members of 02 environmentally friendly forest use clubs with the local people, managers at different levels and all stakeholders in order to advocate for the sustainable forest management and utilization model in the locality. 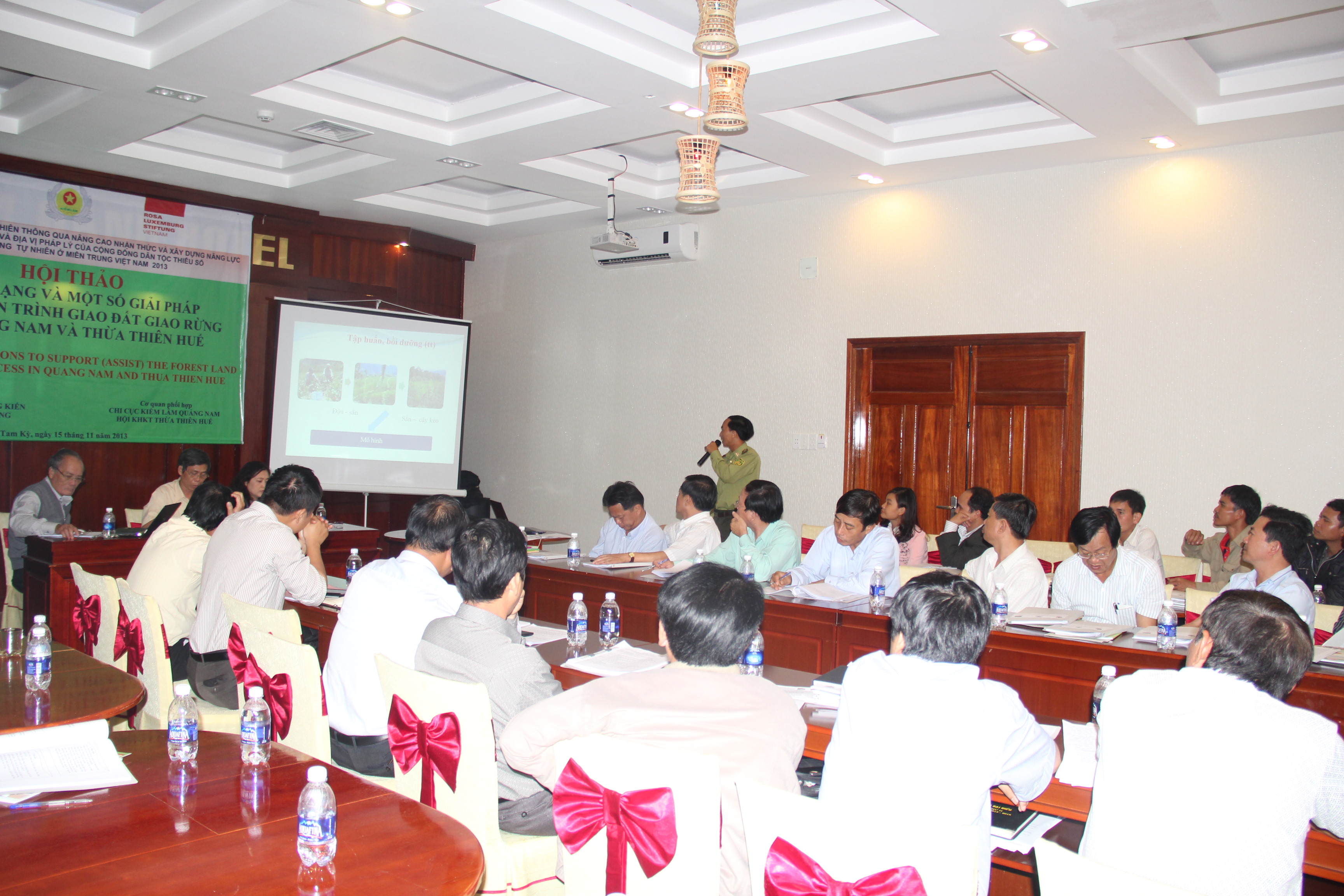 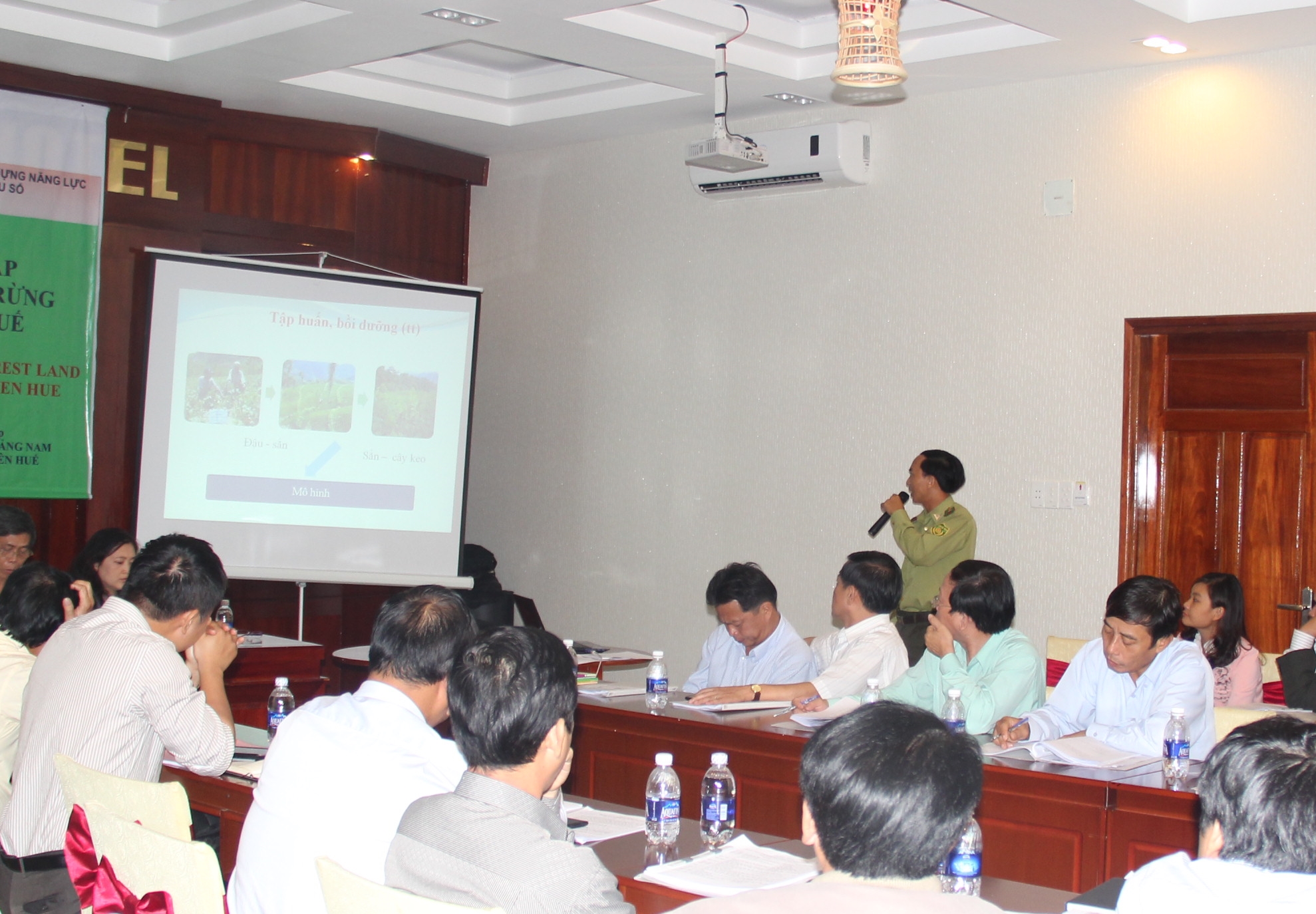 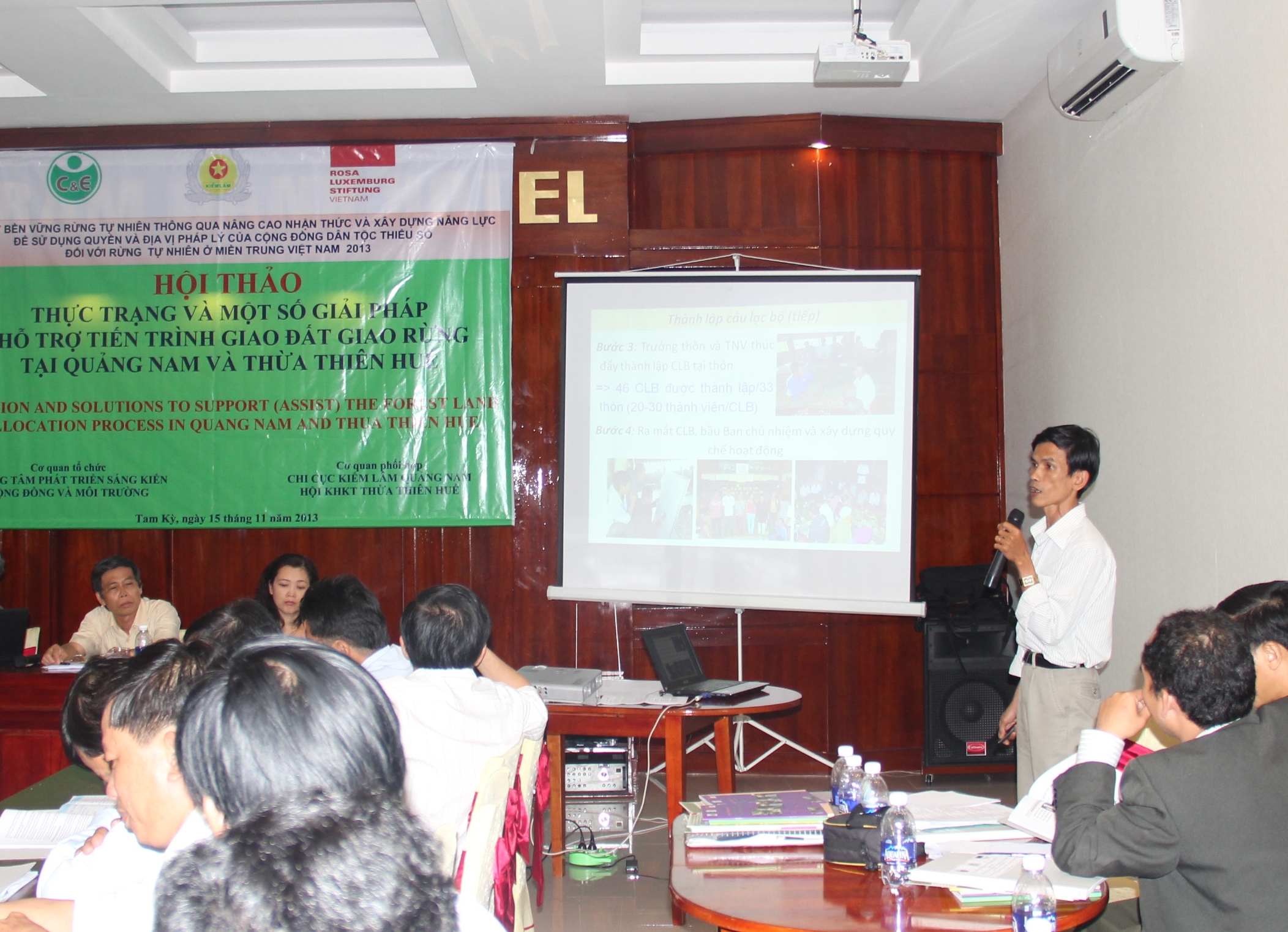 There were six presentations given at the workshop revolved around the FLA issue and operational experience of the clubs. The presentation of Mr. Nguyen Huu Huy – Forestry Department of Thua Thien Hue has assessed the implementation of the legislation on natural forests allocation for communities in Thua Thien Hue and highlighted the legal status and role of local communities in forest management which has been gradually recognized by law through 3 stages. Presentation by Mr. Le Quoc Bao – Division of Natural Resources and Environment of Tay Giang district showed the FLA with the involvement of citizens and stakeholders is a good solution, providing high efficiency for this work in Tay Giang. 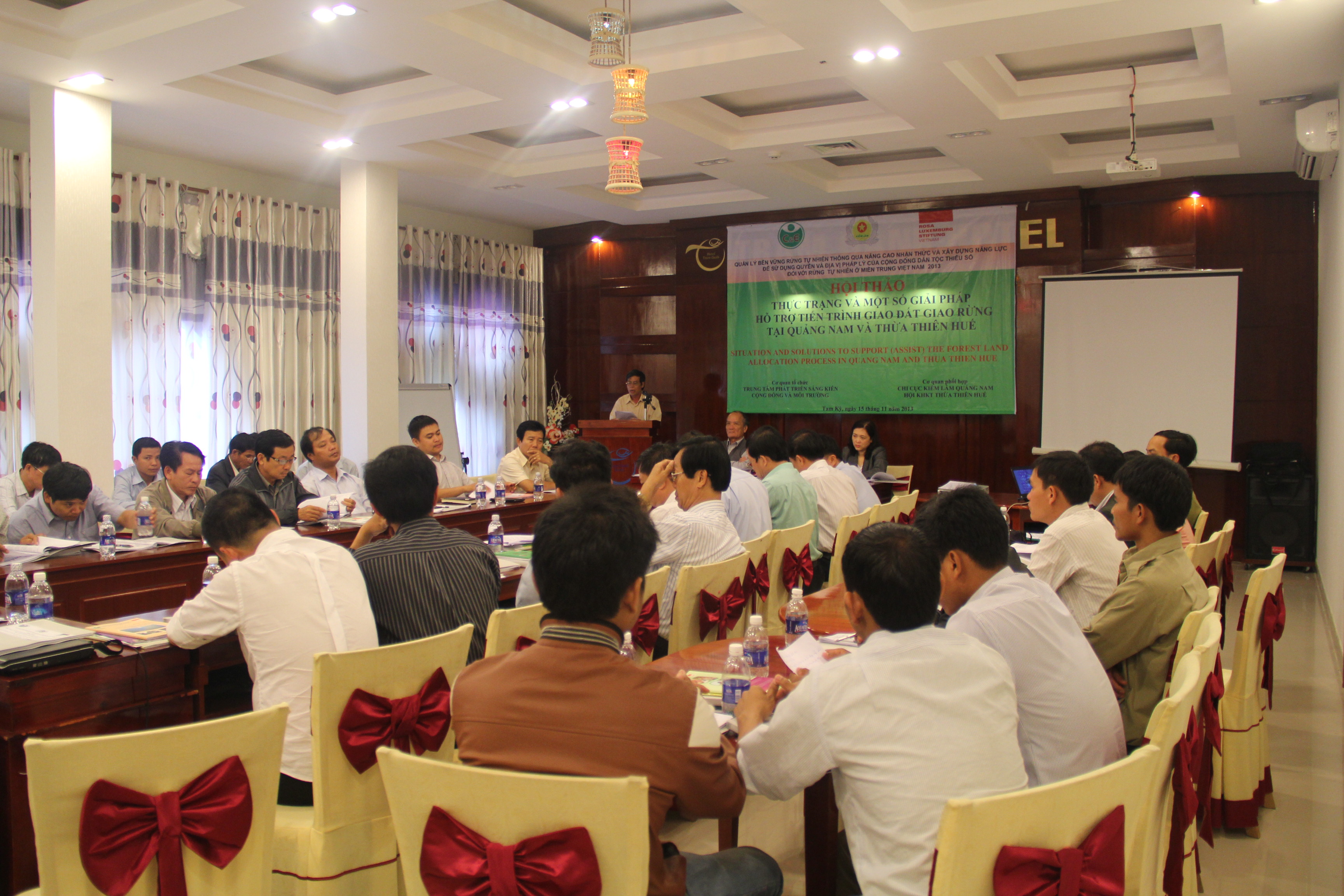 Report findings to review legal documents related to the FLA process in Thua Thien Hue and Quang Nam of C&E center highlighted achievements and difficulties in the FLA process in 2 provinces. It also points out the shortcomings to edit and proposes solutions for legislation in order to promote and enhance the efficiency of the FLA in Vietnam.

Three reports of two project partners (Quang Nam Forest Protection Department and Forestry Science & Technology Association of Thua Thien Hue) and the Board of project management Malteser in Tay Giang district, Quang Nam province focuses on results and lessons learned, experiences in raising awareness and capacity for club members / board of CFM from which enhance the performance of these clubs. Finally, the director of C&E summarized the project activities in 2013 to assess the success of the operation in two provinces and proposed planning and collaboration with stakeholders in the next year 2014.

The result of the discussion participants focused on the analysis, commentary of the inadequacies and shortcomings of the state’s mechanism and policies related to the FLA for community; problems and challenges of the community in management, protection and development of allocated forest’s resources, a number of issues related to policy supporting for the community after receiving the natural forests protection and management as well as further improve the performance of the clubs, hobby groups of sustainable forest management and use.

The workshop participants strongly agreed, highly appreciated the results of project activities. According to Mr. Nguyen Khac Tuong – Deputy chief of Quang Nam Ethnic Affairs: "Natural forest in Quang Nam has nearly 400,000 ha concentrated in the high mountains where many ethnic minorities live but the work of propaganda here is still lacking, so that the project of the C&E center, which has implemented many activities and communication on the management of community forests in these areas, is very good and meaningful". In addition, Mr. Nguyen Van Mua – Chairman of the Board of CFM in Khe Tran village, Phong My commune, Phong Dien district, Thua Thien Hue stated that: "Since given the assistance of the project, its members and the people have a greater understanding about their rights and responsibilities when they were allocated 198.7 ha of natural forests to manage and protect, and the Board of CFM’s activities have deepened, fund of forest management and protection has increased and that created incentives for people to manage and protect the forest". 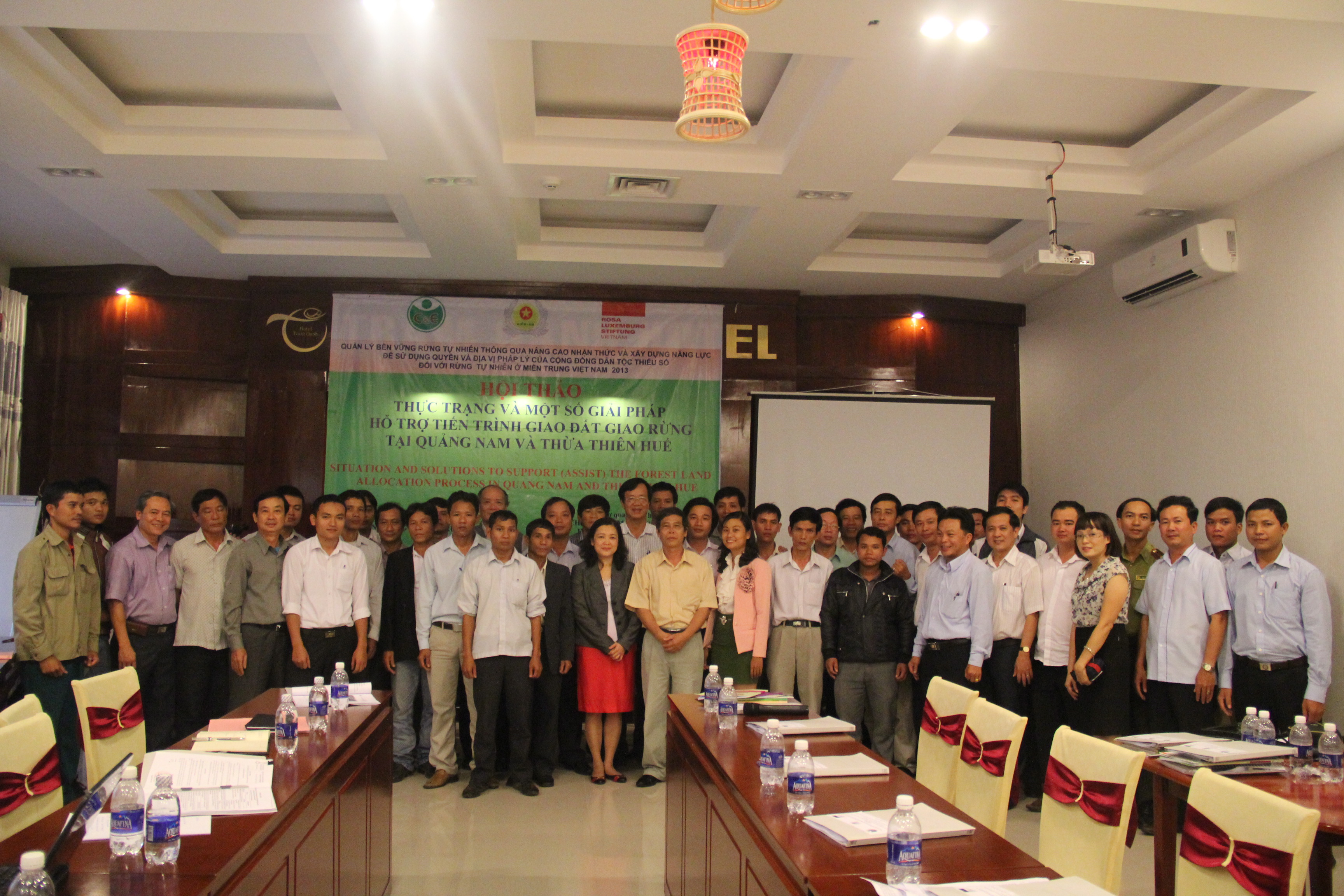 The participants have suggested some ideas and concrete solutions that are suitable to further improve the efficiency of the FLA activities locally as well as the participation of stakeholders to support and promote this process. Mr Do Tai – Chairman of the Dong Giang district People’s Committee shared “Since August 2012, the PC has deployed the work of forest allocation for groups of households in 7 villages of Ma Coi commune, near the A Vuong hydropower under Decree 99 – payment forest environmental services, however, although the people received only 274.000d/ha, the forest was very well protected”. Solutions and recommendations of the workshop will be sent to stakeholders at all levels and are also inputs to the activities of the project in 2014.